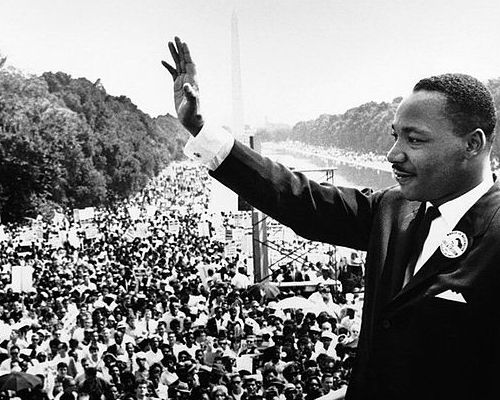 On August 28, 1963, Martin Luther King, Jr. led a march on Washington, D.C. The speech he gave that day is one of the best known in American history. When people remember the “I Have a Dream” speech, as it has come to be known, they recall King’s message about civil rights. But perhaps the reason it is so memorable is because King was a master of literary and rhetorical devices. His word choice matched the strength of his message.

This lesson plan allows students to review literary terms, rhetorical devices and figurative language with a scavenger hunt through “I Have a Dream” speech. Then you can have students discuss or write about the speech using the literary terminology. This lesson can be modified to work well for everyone from students just learning about metaphor for the first time to AP students reviewing for their upcoming exams.

1. Review the following literary terms. (You can choose as many or as few as you’d like for your class to focus on for this lesson). If you click on the hyperlinked terms, you’ll find definitions and individualized lesson plans that we’ve created for the term.

2. Give some historical background on the “I Have a Dream” speech by watching Flocabulary’s civil right’s song, “Let Freedom Ring.” The song will be free for Martin Luther King day, until January 20. Learn more about Martin Luther King, Jr. with our blog post about his life.

3. Give each student a printed copy of the “I Have a Dream” speech, which you can print from here. Explain to students that they’ll be looking for the literary terms you’ve reviewed.

4. Show the video of the speech, and while students are watching, ask them to underline and label examples of literary terms that they find. (You could even just focus on metaphors.)

5. Give students time in small groups to review the examples that they found and search for more. You could also make this a competition to see which group can find the most examples of literary terms.

6. Review the findings as a class. Either hold a discussion about how King’s use of these literary terms helped him to spread his message, or ask students to write an essay addressing that question.

Examples of Literary Terms in the “I Have a Dream Speech” 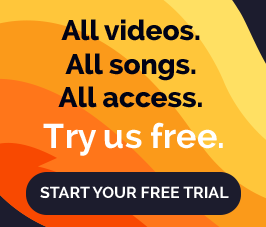 Alliteration
The repetition of sounds makes the speech more catchy and memorable.

In a sense we have come to our nation’s capital to cash a check.

We cannot be satisfied as long as a Negro in Mississippi cannot vote and a Negro in New York believes he has nothing for which to vote. No, no…

Allusion
By using a classic American President’s speech and a famous African-American spiritual as bookends to the speech, he is demonstrating the equivalent worth of both cultures.

The speech begins with “Five score years ago…”, a reference to the Gettysburg Address and ends with the “words of the old Negro spiritual, ‘Free at last! free at last! Thank God Almighty, we are free at last!'”

Anaphora
This term describes the most famous part of the speech: King’s repetition of “I have a dream.”

I have a dream that one day this nation will rise up and live out the true meaning of its creed: “We hold these truths to be self-evident: that all men are created equal.”

Assonance
Like alliteration, assonance adds an element of musical poetry to the speech.

We must forever conduct our struggle on the high plane of dignity and discipline.

This momentous decree came as a great beacon light of hope to millions of Negro slaves who had been seared in the flames of withering injustice. It came as a joyous daybreak to end the long night of their captivity.

Now is the time to rise from the dark and desolate valley of segregation to the sunlit path of racial justice.

In the 3rd and 4th paragraph, King plays with the extended metaphor of extending a check.

With this faith we will be able to transform the jangling discords of our nation into a beautiful symphony of brotherhood.

There are many more metaphor examples. Could you find them all?

Metonymy
These places are not chosen at random. They represent locations that were filled with racism at the time. For instance, the KKK had just resurged in Stone Mountain.

Hyperbole
We could call this example hyperbole, because King is using lots of “alls” and “every”s. But this hyperbole belies a seriousness; he believes that true justice will only come when every person believes in freedom for all.

And when this happens, when we allow freedom to ring, when we let it ring from every village and every hamlet, from every state and every city, we will be able to speed up that day when all of God’s children, black men and white men, Jews and Gentiles, Protestants and Catholics, will be able to join hands and sing.

Parallelism
If you ever want to jazz up a crowd, use some parallelism in your sentences. It will make people ready to fight…peacefully, of course. It also makes the lines memorable, and perhaps represents the equality of the people fighting together.

Personification
King is casting American society as a person who has done African-Americans wrong. He believes that people who are fighting for civil rights aren’t fighting a person, but rather a system.

It is obvious today that America has defaulted on this promissory note insofar as her citizens of color are concerned. Instead of honoring this sacred obligation, America has given the Negro people a bad check, a check which has come back marked “insufficient funds.”

Simile
This simile demonstrates the power of justice and righteousness, as well as the belief that equality is a natural thing. It’s also one of the most famous lines of the speech.

No, no, we are not satisfied, and we will not be satisfied until justice rolls down like waters and righteousness like a mighty stream.

Synecdoche
By representing people as bodies or flesh, King is reminding his audience of that the problems they’re currently facing are related to their skin color.

We can never be satisfied, as long as our bodies, heavy with the fatigue of travel, cannot gain lodging in the motels of the highways and the hotels of the cities.

Like this song and lesson plan? Get access to all our songs, videos and lessons with a two-week free trial.