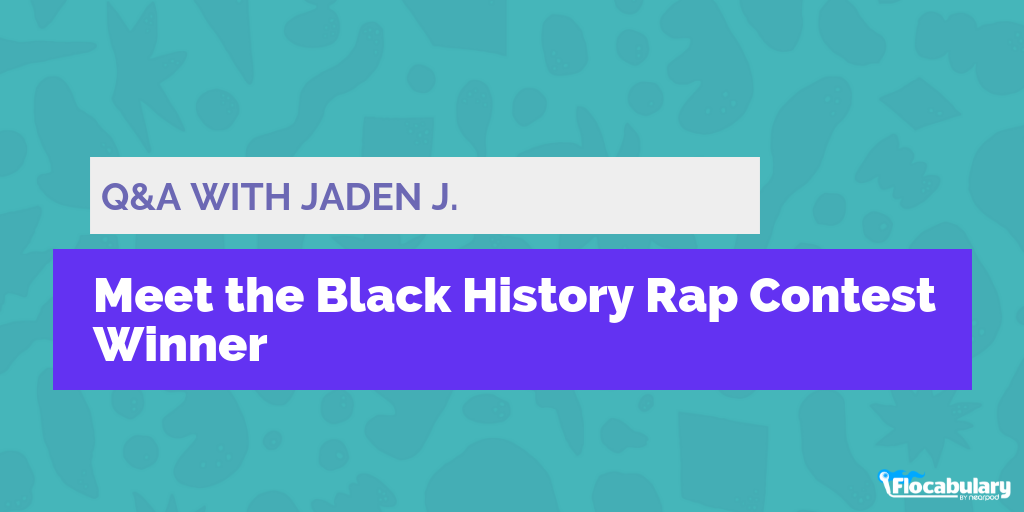 We are thrilled to announce that we’ve selected our winner of the Black History Rap Contest: Jaden.

Jaden J. is a gifted poet, and with over 1,000 submissions, his immediately stood out for its emotional power and imagery even in its opening line and impressing us with his lyricism all the way through. Jaden seamlessly wove together John Lewis’s biography, the broader historical context, connections to today and the impact he has had on him personally.

In his video, it’s also clear that Jaden is a talented performer. We can’t wait to meet him in person when he records his song with us in Brooklyn! Learn more about Jaden in this Q&A!

Why did you choose John Lewis?

Jaden: When I heard of this contest, when we were watching it on the video in my classroom, he was just the first person that came to mind because a couple of years ago when the movie “Selma” came out, we went to go see that movie. And just seeing those people being on that bridge for just trying to vote and fight for our rights; my grandmother, she’s a retired teacher, she always taught us about black history and she always taught us about him. He was probably one of the first people, next to Martin Luther King, that I learned about and his work. So he was probably one of the first people that came to mind, that’s the reason as to why.

Did you work on these lyrics as part of a project, did your whole class do it? 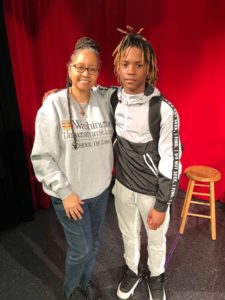 Jaden and his English teacher Jeanne Miller
What was the best part about entering the contest?

Meet our finalists: Black History Rap Contest Results Are In

How did you do the research for John Lewis?

I had information already when I had John Lewis in mind so when I went and I looked up when he was born and stuff, it just started coming together in my head; Okay how will I put this in my rhyme scheme, how I’ll put it down on paper and put it on a beat.

Have you rapped before?

Yeah I’ve rapped before, I write a lot of poetry and I do a lot of journalism. I haven’t realized it but it’s helped my handwriting, it’s helped my English and my English skills because I’ve been placed in a lot of honors classes in English and stuff and I haven’t noticed it but over the years when I used to write in my journals, I used to do a journal every day back in middle school, and it just really helped me. So when I got into high school my music and my poetry and just English and general, my writing has gotten a lot better.

Do you have any hip-hop artists that inspire you?

Oh, oh yes. J. Cole. I really admire him and his music. The way he puts out his music on a wild platform, he always speaks about what’s going on in the world, you know, constantly he stays focused on a topic. He’s not always talking about guns and killing somebody or shooting somebody, he just keeps his eye on the prize and always speaks on what’s supposed to be spoken on. It’s not like, relevant music you know?

Strange fruit hanging from trees in the night swaying in the wind symbols the ending of life
Picture your mother dead just for trying to vote
inside you done
you feel yourself slowly dying of hope
They saw us being killed and they tightened the rope
The more and more we spoke out, the higher we’d go
Those hoses part the streets like Moses in his prime
we’ve come a long way, but pain still lingers in our mind
we say this world is better things happen to bring back time
they tried to knock us down thought that we would go run and hide
Actions are made in life, results ‘a crying me lemme tell you bout someone who was willing to die for me
someone who fought for rights to get equality and peace they said to preach the word ima speak on reality
John Lewis is a real figure in this movement black lives matter and to this day we still use it
Born in Alabama 1940 into segregation he worked the fields something we don’t know about this generation
To make a living in this country all the problems facing he was a Black man who beat the odds with an education
Such a reason we as blacks can go enjoy vacations tell a story from his face his life you start to trace it
They tried to wipe us out and that fact we’ll never lose it he protests for our rights to eat together as one unit
he wanted us to be one whole I see a black and white diverse class in front of my eyes so yea we’ve reached that goal
In that time blacks and whites couldn’t ride together, Lewis decided that that wasn’t going to be life forever
John Lewis was of the famous 13 who rode a bus of black and whites cause Dr. king had a dream.
A freedom rider, a leader with respect arrested over 20 times – equity at its best
Crazy how our activist get thrown in jail for some nonviolent acts we gotta hold a cell
But they can beat us down and shoot us 16 times in the back, go to court and people barely wanna acknowledge that
I understand people see it from a certain view put you in my shoes what happens when it’s down to you
1965 Lewis marched for the right to vote he led 600 people an event that makes one clear their throat
state troopers just wouldn’t let them past on his knees he prayed with others need y’all to listen, class
told them to disperse when they didn’t, they started throwing gas started attacking protesters with everything they had
Lewis ran police caught him man and they beat him down fractured his skull cause his skin was brown Bloody Sunday
( thought that we would go run and hide)
A couple of months later August 6 voting rights became (an act and) I just can’t resist
thanking John Lewis himself for paying on that day no longer to this system anymore we’ll be its slaves
Because of him, African Americans have more in life he gave a chance to go and score in life
And I say thanks, thank you for fighting for the future and the lives today
A man of pride, a hero who paved the way
Superman can kick them rocks cause Lewis saved the day
A real soldier fighting for the justice of others so we get closure Freedom of Speech I grinding this beat like some Folgers
U.S representative 5th district, he’s a holder
Lewis still fighting for our rights to this day
You are a hero forever that’s all I gotta say,  “We were determined not to let any act of violence keep us from our goal. We knew our lives could be threatened, but we had made up our minds not to turn back”
(thought that he would go run and hide)