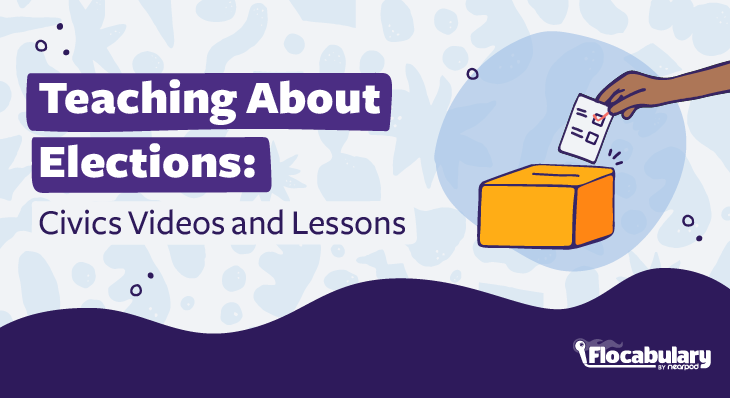 To gear up to teach about the elections with your students, Flocabulary has curated videos and lessons that you can use in your civics classroom. Explore resources about the election process, campaign ads, and persuasive language. In addition, we have resources comparing political platforms that can be used to teach about presidential debates. Get started teaching about the state, local, and midterm elections with Flocabulary!

In the United States, there are many elections, including local and state elections, midterms, and a presidential election every four years. In this lesson, students will learn why voting is both a right and a civic responsibility for citizens in a democracy. They’ll learn the difference between direct democracy and representative democracy and understand why not voting is a choice to be silent. Students will discover how to register and be informed voters so that when it’s time for them to cast their ballots, they can be sure their voices are heard.

This song explains the vocabulary of the three branches of the US government and the system of checks and balances. Laws are written in the legislative branch, which contains the Senate and the House of Representatives. The Senate is composed of two senators from each state. Membership in the House of Representatives is determined by population. Laws are carried out by the executive branch, which is composed of the president, vice president, and the Cabinet. The president has the unique position of Commander in Chief and gives the final word on military matters. He also has the power to veto bills and appoint Cabinet members and judges. The judicial branch consists of the courts, including the nine justices composing the highest court: the Supreme Court.

This song introduces the concept of American political parties. Each party has a platform or a list of views and issues. The United States has a two-party system: Republicans and Democrats. There are also smaller third parties like the Libertarian and Green parties. The Democratic party’s symbol is a donkey and its color is blue. Democrats tend to be more liberal or “left-wing” and be in favor of government regulation. The Republican party’s symbol is the elephant and its color is red. Republicans tend to be more conservative or “right-wing” and oppose government regulation.

In this song, we explore how presidents of the United States are elected to office. To be eligible to run for the highest office in the land, a candidate must be American-born and at least 35 years old. Candidates must then win a primary election within their party in order to become the party’s nominee. They then chose a running mate, their vice presidential candidate. The two-party nominees have several public debates as the election approaches. They fundraise and campaign intensely to try to win over “swing states,” or states which could go to either party. The candidate who gets the most electoral votes becomes the next president of the United States. If there is no majority, the House of Representatives decides.

What are political debates? How do they help inform voters? In this civics lesson, students will learn what representative democracy is, how voters can make an informed choice, and why political debates are an important part of a presidential election.

Start teaching about the election with Flocabulary

We hope these resources are useful for use with your students in your civics and social studies classroom. With Flocabulary, you can access a library of hip-hop infused songs, videos, and standards-aligned lessons for K-12 subjects. Sign up below to get started.