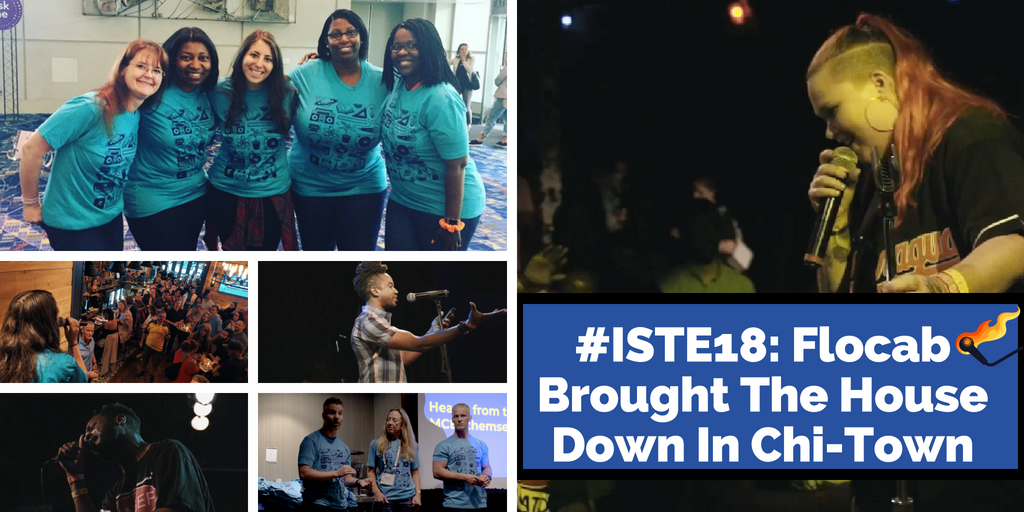 Now that we’ve had time to reflect on all the amazing things that happened at #ISTE18, we’ve prepared this run-down blog post for those of us who are trying to relive the excitement, as well as for those who couldn’t make it to Chicago. We tried a lot of new things at #ISTE18. We ditched the booth, threw some fantastic parties and got to hear from our teachers and students – which was definitely the highlight for us. If you’re part of the #NotAtISTE crew, don’t worry. We’ve got a recap for you, with plenty of videos and photos of the highlights to check out. Let’s go!

Earlier this year, thanks to the Flocabulary community’s support, one of our Master Certified Educator Blair Mishleau was able to get two People’s Choice Sessions selected for #ISTE18.

In one session, Blair engaged in an interactive conversation with over 90 session attendees about culturally responsive pedagogy and how ed tech can play a large part in creating a more inclusive and relevant classroom. Next, he led a session all about Flocabulary and how to best use the platform for STEM education and differentiation.

As a kickoff to our week in Chicago, Blair did a wonderful job engaging with the participants and conducting meaningful conversations about Flocab and the education space overall. (To see his presentation decks, go here).

We had not one, not two, but FOUR Flocabulary MCEducators lead Tuesday Training sessions on how they implement Flocabulary in their classrooms. All day long, these experts shared their Flocab tips and tricks with conference attendees. Also in attendance were several Flocab staff members who led training and product updates — it was a day filled with learning, interacting with Flocab users and, of course, rhyme writing.

Thanks @Flocabulary for the lunch and learn session. Found out about so many new features & I wrote a rap about love. Here are my bars:
Love is about friendship, hearts, and hugs.
Valentine’s is a holiday, but everyday we need love. #ISTE18 @MsTran_bcsd
— Jessica Levine (@SCTechJess) June 26, 2018

You can find the presentation decks that were used on Tuesday here.

This year, Flocabulary tried something a little different in terms of our conference happenings. We hoped to create an experience that was not only informative but also impactful, and that would include educators and the Chicago community — and something that would encompass our dedication to amplifying student voice.

Our grand finale event, the Concert & Open Mic, was the biggest performance experience we’ve ever hosted. It was an experiment and one that seemed to make a real impact.

From start to finish, we welcomed members of our community into a night filled with hip-hop — buses covered in graffiti transported people from the conference center to our venue, Reggies, where they were welcomed with Flocab lunchboxes and t-shirts. And then, our cypher began, where students, teachers and artists shared their truths. It was a different kind of classroom.

We partnered with Young Chicago Authors and had the opportunity to hear spoken word excerpts, raps and poems from local students, highlighting their truths.

The first spoken word poet, Jaylen Kobayashi, bravely told the audience about his struggles with neighborhood terrorism and violence at school. A few YCA alumni came to support and perform as well. The Huey Gang brought energy to the house by rapping about acceptance and peace. You can check out both performances below.

What an amazing night!! So many talented artists and those students!!! #iste18 @YoungChiAuthors @Flocabulary pic.twitter.com/USZWyM70VX
— Margaret Sisler (@TechyMargaret) June 27, 2018

Young people are the best documentors of their own stories. Encouraging young people to be the writers of their own narrative @YoungChiAuthors #iste18 @Flocabulary pic.twitter.com/Ne2D8P50Aj
— Margaret Sisler (@TechyMargaret) June 27, 2018

Our teachers set the stage on fire during the open mic. We had lots of incredibly talented teachers submit raps and poems to this portion of the night. We read through and selected some amazing pieces, all focusing on how their students have impacted their lives. We also had a few impromptu guests join us on the stage, including teacher Toney Jackson (you may recognize him as the ‘rapping teacher‘ in Windows 10 commercials.)

When Toney Jackson graces your event with his presence and his words @Flocabulary #ISTE18 pic.twitter.com/fz8J6Mkqp6
— Alex Rappaport (@alexrappaport) June 27, 2018

The final performances of the night were from Flocabulary artists; Blimes, Fat Tony, Sammus (to learn more about Sammus, check out her Extra Credit video!) and a surprise performance from Ike Ramos. Our artists got to show off some original songs in addition to their Flocabulary lessons, which highlighted their unique talents, voices and struggles.

Of course, we thought the Open Mic was definitely a highlight, but don’t just take it from us. Educator and ISTE attendee Matt Hollowell wrote a Medium article about his experience.

Flocabulary threw a three-hour concert that spoke loudly to the issues largely missing from much of the conference rooms: youth voice, racism, immigrant struggle, gender politics, sexism, violence, inequality, and injustice. In language that was real, authentic, uncensored, and unashamed, those in attendance were challenged by our community, our colleagues, and our children to leave behind tools and upgrades and newness and ideals to face, for a few moments, our present reality. It was surprising and shocking, and I still haven’t recovered.

MCEducator Alicia Duell, who also presented during our Tuesday sessions, also posted a blog post about her experiences at ISTE, which you can find here. She described our Open Mic as a moment of clarity:

As for what had the greatest impact on me, what it all boils down to are Moments of Clarity and Connection. By Moments of Clarity, I mean those moments that caught me by surprise, cut through the noise, seemed “essential” in some way…Many edtech companies host evening social events during ISTE. I would argue, however, that the best and most important event was Flocabulary’s Concert and Open Mic Night…In a nutshell, it was about everything that ISTE purports to represent: student voice and engagement; teacher voice and engagement; equity and diversity. At no time did the Flocabulary staff get on stage to talk about subscriptions, pricing, or anything remotely feeling like a sales pitch. Instead, students from Young Chicago Authors shared their poetry on stage, educators tried their hand at rapping about their classes, and even Flocabulary’s own hip hop artists rocked the mic with some Flocab raps as well as their own songs. I also talked to one of the co-founders for a while about how we can continue connecting teachers, students and the artistic community in meaningful ways. For this white, suburban educator, it was an incredible moment of clarity.

And the tweets kept rolling in…

@flocabulary listen! By far the best part of #iste18 so impactful and relevant to the culture and learning.
— Cherelle Y. (@misscyo) June 27, 2018

You know who knows how to throw a party? @Flocabulary !!!!! Shoutout to y’all for giving those young artists a platform and for being such amazing hosts ❤ #ISTE18
— Aishia Daffin, Ed.S. (@Daffin_EdTech) June 27, 2018

After @Flocabulary mic night last night, I feel so refreshed as an educator! Thank you to @Flocabulary and to Chicago Youth- you were amazing! If you didn’t go, you missed out! #ISTE18
— Jess Schwarzkopf (@msschwarzkopf) June 27, 2018

After meeting with many vendors at #ISTE18, I agree, Alice. Though, I did have a moment (well, night) with @Flocabulary that was both authentic and student-empowering. And I can’t stop talking about it: https://t.co/Jk4WTJpd5Z. Changed the landscape for me.

From the entire Flocab ISTE 2018 crew, we want to thank every one for supporting us and coming to our out-of-the-box events. We took risks at ISTE this year, which provided us so many learning and growth opportunities and we’re grateful to have such an amazing community of educators, students and artists. Catch you next year!