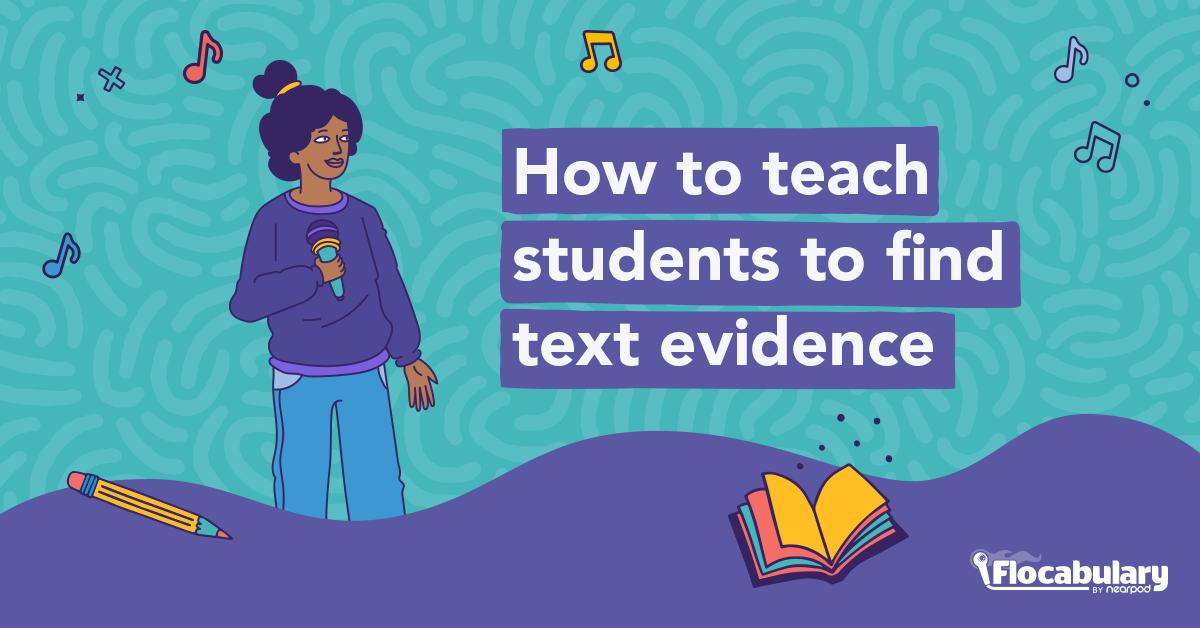 Finding text evidence allows students to check their answers for accuracy and provide proof to support their claims. It’s essential to make sure there is evidence to back up ideas or opinions, whether your own or someone else’s. Text evidence helps students prove their points and makes their arguments stronger. This skill can be used across all subjects, specifically for English Language Arts (ELA). Searching for textual evidence isn’t only limited to text.

With video’s growing role in the classroom, finding text evidence in other forms of media has been more prevalent than ever. With Flocabulary, you can implement text evidence instruction in compelling, engaging, and relevant ways.

What is text evidence?

A piece of information that an author or content creator uses to support their idea or opinion. Students are often asked to include text evidence when writing an essay. It helps them prove their point and make their argument stronger in the classroom. We also often look for text evidence when determining if a source is reliable or if an argument makes sense. Looking for text evidence is like asking an author: “How do you know?” Text evidence says to the reader: “Here’s proof. This is how I know.”

When we teach students to look for and cite text evidence, we are teaching them to check out if the claims made in a piece of text seem legitimate. How is the author supporting their claims? Equally as important, we teach them to seek greater understanding by deepening what they know about the topic.

Similarly, when we ask students to cite textual evidence in their writing to support their own claims, we ask them to strengthen their claims by providing proof. We want them to show their audience that they know what they are talking about; that they can back up their argument with evidence.

Video is the new “text”

While looking for text evidence might come naturally to us as adults, it’s something that we had to learn at some point. I remember finding and citing textual evidence while writing research papers in middle school. I went to the library with my classmates, and we used the Dewey Decimal System to find books on the topic we wanted to write about. As I type this, that process—pens, paper, notecards, highlighters— seems from a bygone era. That’s because, nowadays, many of us get our information from a wider variety of sources.

The definition of a text has expanded beyond the traditional written word to music, video, social media, and more. Even a live performance could be considered a text. Many of the texts that young people consume come in the form of Tik Tok videos, Instagram captions, Youtube videos, movies, and TV shows. There is a whole new generation of texts to read, listen to, and watch.

Why is it important to be able to cite text evidence?

The internet – and social media in particular –  is a great equalizer. It gives peers, comedians, novices, and salespeople the same platform and audience as professionals and subject matter experts. Young people today, more than in any other generation, are bombarded with information on screens of all sizes. According to a report from Common Sense Media, screen use increased by 17% for tweens and teens from 2019 to 2021 after the start of the pandemic.

So how are we supposed to help young people tell the difference between the ideas and opinions put forth by individuals with legitimate credentials and those with no credentials? One way to be a discerning consumer of information is to pay attention to the details. In other words, the evidence that supports the central idea of the argument. Is there text evidence? Does it make sense?  This is one area where text evidence instruction comes into play.

To help our students grow into informed, thoughtful, and discerning citizens, we must help them learn how to consume content wisely. And a lot of the time wisely means skeptically. We also want to teach them how to make compelling cases when they create their texts. This is a skill that will support their critical thinking and verbal intelligence. So, what’s the best way to teach students to find text evidence?

There’s Flocabulary for that…and now Break it Down

Flocabulary has long been helping students develop into informed, thoughtful, and discerning citizens who can both spot a strong argument and make one. As you probably know, Flocabulary is a library of educational hip-hop lessons, videos, and activities for K-12 learning. Flocabulary has a suite of features that accompany each video, including Read & Respond, Quiz, and Lyric Lab, that instruct students to look to texts – both video texts and written texts – for evidence that supports an author or rapper’s idea or opinion.

Flocabulary has always aimed to meet students where they are and to let their interests be the guide. That means hip-hop animated videos with relaxed and relatable hosts, unique tech features, and gamified learning that is accessible for all different types of learners.

Flocabulary has added a new activity called Break It Down*. Break It Down specifically targets citing textual evidence as a critical 21st Century skill for students. 21st Century skills include critical thinking, media literacy, and communication. Break It Down supports these skills by giving students the opportunity to show that they can back up a key takeaway from a text with evidence from that exact text. It’s targeted text evidence practice. And it’s fun! It uses the same technology young people use when they edit a Tik Tok video to get the same clip they want.

*Break It Down is available in a Flocabulary Plus school or district license.

As part of the new Break It Down feature, students will be presented with a set of questions that prompts them to search for and cite text evidence after each video they’re assigned. Break It Down combines multiple-choice questions, an evidence selection tool, and open-ended questions to encourage deeper engagement with Flocabulary videos. As part of this experience, students will be asked to select a clip from the video to support the answers they’ve provided and submit it for review. This is a process most young people are familiar with, from editing their own videos on a smartphone.

The Break It Down feature asks students, for example, to name the main topic from Oceans. No real surprise here. The main topic of the Oceans video is… oceans. But there’s more. The Break It Down tool instructs students to select a clip from the Flocabulary Oceans video that supports their answer choice. They get to scrub through the video to find evidence that supports their claim. It’s like inviting students to say, this is what I think, and the evidence is right here in the text!

For grades three and up, students will be asked a third, open-ended question in the Break It Down Activity. They will be asked to explain how the evidence they selected supported the answer they chose. This is an opportunity for students to synthesize what they learned and practice making their own argument grounded in text evidence.

Break it Down in the classroom

For example, in the lesson on the Pea Island Lifesavers, students are asked to make an inference about the video they just watched through a multiple-choice question. After making their selection, they’re asked to find a clip, or text evidence, in the video that supports the answer they chose. Then comes the final open-ended question: “How does the clip you chose support the inference you made?” The Break It Down activity invites students to do more than just analyze the video. Through the sequence of a multiple-choice question, the evidence selection tool, and an open-ended question, students test their knowledge, support their response with text evidence, and explain how the evidence supports their response all in one activity—a deep engagement with a Flocabulary video as a text.

Dive deeper into Flocabulary Plus

In addition to the new custom-made Video Texts, Break It Down takes advantage of the hundreds of video texts that Flocabulary already offers and targets questions like “What is text evidence?” and “How do I cite textual evidence?” Students get hands-on text evidence practice when they back up their opinions about a video with clips. Research shows that hands-on learning elevates nearly every type of learner. Plus, students are learning about all the different forms a “text” can take by practicing with the form that they consume most often in their day-to-day lives: video.

Break It Down is a fun and meaningful way to teach students about text evidence using a library of videos they already know and love.

Interested in reading more about this topic? Check out this blog post: How to build student connections using music to teach in the classroom

Tierney is a writer, strategist, and lover of learning.