We all know the importance of effective teaching. We know effective teachers raise their students’ test scores, boost their self-worth, and inspire them to become open-minded students and good people. But what makes an effective teacher? A potent combination of precise classroom management and content-area knowledge. So says a recent article in the New York Times Magazine.

The article details the work of Doug Lemov, an educator who set out to study America’s best teachers. He distilled his observations into 49 techniques that teachers can use to run effective classrooms. Here are a few, paraphrased.

The idea here is to acknowledge when students follow your instructions with a positive remark, but not one that indicates surprise. Saying “thank you” or “he’s doing it” is better than saying “wonderful, thank you so much.” You want students to get the idea that their good behavior is being noticed, but that it’s also expected. Here it is in action:

When student behavior is disruptive to a class it may seem like the only alternatives are to ignore the behavior or take up valuable class time verbally addressing it. Lemov found another technique. When a student begins to exhibit a behavior that the teacher doesn’t like (such as slouching or talking), the teacher moves toward that child and makes a meaningful gesture to correct the behavior. This doesn’t interupt the flow of the class. Watch a fifth grade teacher who has this technqiue down to an art-form. The video is here, it’s the fourth video down.

When students have the expectation that either a) they won’t be called on because they don’t raise their hands or b) if they’re called on they won’t speak, what compels them to pay attention? Lemov found a solution to this problem in a technique called “cold calling.” A teacher asks a series of questions that he knows most students can answer; he pauses for a moment, and then calls on one of his students’ by name. He does not have students raise their hands. The expectation is that the student is to repsond to the question immediately. When a student gets an answer wrong, the teacher asks another student to correct the answer. Here it is in practice:

You can see more of these techniques on the Times website and at Uncommonschools.org. 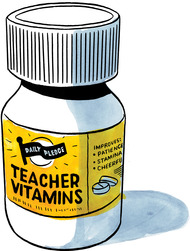